Why We Grow and Eat "Organic" Food

We recently came across an article that revisited the incredible results from a 2019 study of four families who radically reduced the traces of insecticide, fungicide and herbicide residues found in their urine from switching to an organically-grown diet for just six days (study linked below). And, while this is a very small sample of people to test, the results are striking!

Chris and I eat almost exclusively organically grown foods when we're at home. At 71 and 58 years old respectively, we are both very healthy. Neither of us has seen a doctor for any reason since we met 13 years ago! We take no prescription medications and, in fact had a bottle of aspirin pass it's expiration date in our medicine cabinet because we were too slow in using it for occasional muscle soreness or headaches! We each have had two colds in the last 13 years but no other illnesses that caused us to be bed-ridden for even a day. Our food is our medicine (along with other healthy lifestyle practices including the practice of generosity, meditation, stretching and exercise practices and limiting electronics usage) and we feel strongly that a societal shift towards an organic, whole foods, plant-based diet would have significant positive effects both on people's personal health and the health of the natural environment as well.
We are at an advantage over most people as our large gardens provide a high percentage of the foods we eat but for many years we have made it a priority to let our food-budget reflect our values and we only buy groceries that are organically grown. The only times we don't eat organic are when we eat out at restaurants or are visiting friends, which amounts to one or two times per month.

This post offers an overview of what we feel to be the most important reasons to shift to an organic diet. For those readers who have the financial means to make this shift entirely, we encourage you to jump into an organic life-style whole-heartedly. We also encourage you to cultivate relationships with local farmers through shopping at farmer's markets and co-ops that feature local, organic foods or joining a CSA. See also: Seven Tips for Shopping at a Farmer's Market 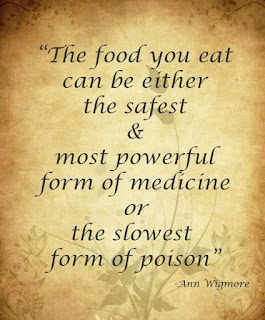 We realize that, for many people who are living close to the edge financially, that committing to buying all your groceries organically-grown may be impossible at this time. If that is the case, consider making smaller incremental changes such as committing to only buying organically and humanely produced animal products (where farm chemicals become most concentrated) or only buying organic "treat foods" (whatever that means for you). Their higher prices may encourage you to eat less of these items which will be better for your own health and  for the health of the planet.

Another option to increase your intake of organic garden-produce is to start your own garden, or start or join a community-garden. LINK: So, you want to start a Sharing Garden.

We like to remind ourselves as we adopt new lifestyle choices that "it's a direction, not perfection." Be gentle on yourself as you make new changes and, if sometimes you decide to eat something on your "no-no list", do it consciously, do it with joy and then re-commit to following your chosen dietary guidelines once again. Happy eating!

So, here are some of the top reasons we feel it is important to eat organically grown foods.

Healthier for you: Ingesting farm chemical residues isn't good for your health. Many of these chemicals can build up in one's tissues over time so, even though we may only eat small amounts with each meal, their accumulated amounts can be significant over a life-time. Also, children tend to be more susceptible to environmental toxins as they are building new tissues at a faster rate than adults. LINK - How much Glyphosate is in the foods I eat? LINK-Pesticide Action Network


Any farmer who grows "organically" may not use herbicides, pesticides or fungicides - unless they have been approved by the organic-certification agencies.

More nutrient dense? The truth is, most organic-farmers struggle under the same competitive conditions as farmers who grow using conventional practices. This means, they need to invest the least amount of money in fertilizers and other soil amendments, and grow their produce as fast as possible, to get it to market ahead of their competitors to make the most profit. These practices lead to more "water-weight" and less nutrient-dense foods. This means that the vitamin/mineral content may not vary much between organic and conventional farmers.  On the other hand, some studies suggest that, on average, organically-grown produce is consistently more nutrient-dense and lower in pesticides and heavy metals. LINK-Large study

This is why it is important to know your farmer so you can confirm that their food is slow-grown and that the farmers are replacing the minerals that get depleted in their soil from harvesting crops.

GMO versus organically-grown:  There is still debate about whether foods produced from Genetically Modified Organisms (GMO's) are a health risk to humans. We are strongly opposed to them because of the compelling research pointing to the possibility that eating GM plants, or livestock raised on GMO feed can lead to leaky-gut syndrome and a whole slew of health problems including severe food-allergies, learning disabilities and autism-spectrum disorders in children. LINK Institute for Responsible Technology-a GMO watchdog group. Genetically Modified plants and animals have the potential of interbreeding with plants and animals that were not genetically modified, with unforeseen consequences. Some GM plants (corn and soy) are specifically bred to be resistant to Round-up and other herbicides meaning large amounts of these chemicals can be used to grow them. This leads to well-documented cases of super-weeds that have become resistant to herbicides and require ever stronger chemicals to keep them in check. LINK: The Dangers of Round-up Ready Foods, LINK-GMO Health Risks  Also, GM corn and soy are used extensively in livestock-feed so you can imagine how these farm-chemicals concentrate in their tissues.

But what about just eating non-GM foods? Well yes, this is a step in the right direction but just because something is non-GMO does not mean that it's grown without farm chemicals. Industrialized farming uses plenty of chemicals in growing the food. Did you know that it is also a legal practice for farmers to use Round-up as a desiccant (which causes withering and drying in plant tissues) to artificially dry crops if conditions are too wet for the crops to fully ripen in the field? LINK-Wikipedia, LINK-EcoWatch.


By definition, organic farmers are not allowed to grow Genetically Modified crops, or feed them to their livestock.

Better for the environment. Anyone following the news knows that our environment is under attack from all sides. Industrial farming is one of the biggest culprits.

Pollinators are under siege from the practices of growing "mono-crops" (all one variety) for thousands of acres, offering no variety in their diet of pollen, and many farm-chemicals are damaging to their health as well. LINK - Why growing sunflowers is great for bees.

Soil health: Industrial farming - through over-tilling and depleting soil of organic matter makes soils void of all life and destroys the structure of the soil itself which no amount of added fertilizers and chemicals can restore.
Industrial farming is a major source of water-pollution. Industrial farming has negative effects on the world's water for many reasons. Here are a few: Heavy Metals build-up; Algae Blooms, Dead-zones and Acidification; Nitrates; Pathogens and Over-use of water reducing water-levels in our aquifers. (LINK-How Industrial Agriculture Effects Our Water)

Many bird species have a hard time finding enough insects to feed their young. Farm chemicals tend to concentrate in the tissues of animals, the higher-up you go in the food chain as Rachel Carson so famously proved in her landmark book from the 1960's titled Silent Spring.

Be aware too, that this principle of chemicals concentrating in tissues applies to foods raised for human consumption too. The accumulation of these chemicals in our own bodies will therefore be less with a plant-based diet. The more meat, dairy and eggs one eats, that are not organically-raised, the higher concentrations people have in their bodies of these chemicals. Bear in mind too that the quality of life for livestock animals grown organically is more humane as well.


Organic farming practices keep our air, water and soil healthier and can even contribute to the increase of viable habitat for wild plant and animal species.

Healthier for the farmers and farm-workers: When we use our purchasing power to make a statement about our values, we are directly contributing to healthier lifestyles for everyone involved in the food-growing community. LINK - Agricultural Chemicals and Human Health In this complex world of competing dietary studies which often offer contradictory results it can be difficult to know who to trust and which dietary practices will be best for your health and the health of the environment on which every living things depends.

If you have been feeling on the fence about whether to make the commitment to eating more organically-grown foods, we hope this post has helped you make that shift. Just remember that wise saying, "You can either pay your farmer now, or pay your doctor later." We think this is good advice. 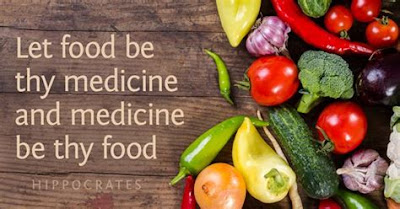 Other relevant LINKS:
Synopsis of "Organics for All" Urine study

Great, short video on "Why Eat Organic"
How to Wash Vegetables and Fruits to Remove Pesticides 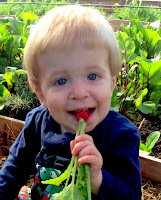 The Sharing Gardens is a registered charitable and tax-exempt organization. We exist primarily through donations. If you have benefited from our project or site please consider making a donation through PayPal (a receipt will automatically be provided for your tax records).

Posted by ShareInJoy at 2:25 PM