Hello friends - Well the hubbub of the holidays is retreating in the rear-view mirror and we're settling back into our garden routines as days get longer and we continue to prep for the first round of seed-planting in mid-February. This post is an end-of-the-year report on our donations to local Food Pantries, some highlights from the end of last year's garden season and some gratitude to our supporters - near, and far.

Harvest totals: 2018 was the first year we had a CSA (Community Supported Agriculture - LINK). We had seven 'share-holders' who received boxes of produce for 25 weeks, from Mid-May to early November. We had to stop one week short of our 26-week goal due to a killing frost but our 'share-holders' were happy with their produce; in fact the most common 'criticism' was that we gave them too much food! We also fed ourselves, and our core share-givers; those who help us grow, and deliver the food (Cindy and Jim, Rook, Sabine, Cathy Rose, Eliza, Rod and Thorin) with weekly boxes and additional surplus for dehydrating and canning purposes.

So, a lot of food came out of the gardens!

Our donations went to three food-pantries: South Benton Food Pantry (Monroe, Oregon) - they receive the majority of our donations as they are located right next to the Sharing Gardens. Local Aid (Junction City) - a full-service community center (professional-clothes 'free-store', fuel-bill assistance and more) - Here's a link to a short video about them. And God's Storehouse (Harrisburg) a simple pantry run entirely through volunteers and donations.


Our donation-numbers were lower this year than in the past, but still quite respectable. We hope to provide as much, or more next year.

Fall highlights: We had gorgeous weather for much of the Fall; temps in the 70's, partly cloudy (with big, puffy, white clouds) - for many weeks in a row. This made it very pleasant to be in the gardens (though we could have used a bit more rain...). In early November we had several cold nights in a row which knocked out the heat-loving plants (tomatoes, peppers - etc) and mostly brought the season to its end.

A great season for leaves! The drier weather meant that autumn-leaves stayed light and easy to rake and bag. We are grateful to the City of Monroe for posting an article (included in everyone's water-bill) requesting people bring us their leaves. We estimate that 25-30 bags of leaves were dropped off by the town's citizens; we picked up another 18-20 (from folks who couldn't bring their own) and we gave away over 50 leaf-bags we'd saved from previous donations, dried and rolled in groups of 6. That's a bunch of bags that didn't end up in the land-fill after only one use! We continue to recycle them for future seasons.

Our "chip's" come in! We managed to connect with the foreman of the tree-trimming service that's been servicing our town and surrounding areas and invited him to dump loads of wood-chips here. We use them to cover our driveway, to feed our mushroom bin and to mulch around our fruit-trees. We received four big loads (and could have had more delivered but that's all we could use).


Bird-feeder party! In early December we invited Cindy and Jim Kitchen to bring four of their grandchildren for a bird-feeder party. It was a highlight for Chris and me during the holiday season.The Kitchen's daughter Jamie, brought three of her kids and two, sweet Mexican girls who she knows from the "English as a second language" program she leads at her children's school. After making several dozen feeders (with pine-cones we gathered on our land, peanut-butter and millet, and sunflower seeds we grew last summer), and garden-cart rides, we headed inside for homemade chili and corn-cake.  We look forward to some more kid-oriented activities in this year to come.


Gratitude: Tina and Swede continue to gather walnuts from their trees and bring them to us. Being vegetarians, we especially appreciate this local source of plant-based protein. One of our two walnut trees fell over in December and the other one is leaning dangerously over our house so we've decided to prune it way back. This will mean our walnut supply will be strongly diminished next year so Swede and Tina's gift will be even more appreciated than before! 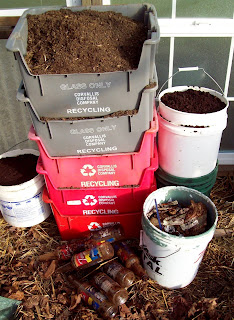 John Kinsey continues to find many ways to support the program. At this time of year it's mainly by bringing us leaves he's raked from his neighbor's lawns and through a weekly pick-up of coffee-grounds - a free resource from coffee-shops that we use to increase soil-fertility LINK.

Cash donations: The Garden received donations from four households totaling $850. Thanks to Judy Peabody, John and Donna Dillard, Jim and Cindy Kitchen and Mike Weaver for your generosity.

We already have over 250 onions planted (for greens, and some will form full bulbs).

OSU students are scheduled to come assist us with whatever needs doing on Feb. 16th through their 'service-learning' program (4-6 students for four hours); we have been hosting groups of students several times a year since 2012!

We hope this post finds you thriving and finding ways to help make this world a better place.
As Mother Teresa once said,

Posted by ShareInJoy at 4:48 PM