This year, the Sharing Garden has received two "Distinguished Service Awards". One from the Tri-Counties Chamber of Commerce and the second from Benton County's Extension Service (the agency that oversees the 4-H program). What follows is the acceptance speech we read at the Chamber of Commerce Banquet.

"Anyone who has been following the news over the past 6 months knows that food security has become a global issue. Food-crops such as wheat, corn and rice have failed due to both droughts and flooding. Last week it was reported that more Americans are on Food Stamps than ever before and right here in our own communities we've seen the recent crises of two local Food Banks. God's Store-House in Harrisburg recently had to temporarily close their doors and Junction City's Local Aid also was facing the empty-shelf syndrome. Happily, both communities were able to rally and get the shelves re-stocked with donations.

We think it says a lot about the Tri-Counties area that you have seen enough value in the Sharing Gardens to honor us with this Distinguished Service Award. The 4-H group of Monroe, and the Benton County Extension Service have also presented us with a Distinguished Service Award this year so, we must be doing something right! Though Chris and I are standing here to receive the Award, the Sharing Gardens would not be possible without all the contributions made through donors and volunteers. The gardens thrive because they have become a hub for people to contribute and connect; each from the level and ability that feels right to them.

The land and water for the two sites have been provided free-of-charge. The tools, fencing, seeds, manure, spoiled hay, and everything else that we use to grow food, was all donated directly, or purchased with money received through gifts and grants. From mid-Spring through mid-Autumn volunteers have come to the gardens as often as three times a week to share in the joys and challenges of organic gardening. This award truly goes to everyone who has been a part of the gardens' success.

As many of you know, the food is grown collectively. There are no separate plots. This creates ease for watering, pest management and seed-saving. The harvest is shared with the volunteers and those who have contributed in some way and the surplus is distributed through local food banks and charities. We believe that no-one should ever go hungry, regardless of their circumstances, and so no one is ever charged money for the food that is grown. 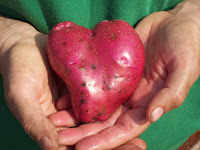 2011, in spite of the cool, wet start, has been a very successful year. Our overall harvest increased by about 30 percent. The total amount grown was over 4,600 pounds!
In one week alone we harvested 583 pounds of tomatoes!
And our overall lettuce harvest was close to 900 heads!
If the people being fed from the gardens had been able to afford to buy this organic produce at the market it would have cost them at least: $14,500 dollars! As Chris and I lived off our savings this year, and did not draw a stipend, the season's budget was only about $2,000 dollars. (A pretty good return on the investment!) (For a full report on amount of produce grown or our operating expenses, send us an email.)

In the interests of local food-security, part of our mission has been to grow-out and save seed from heirloom varieties of plants that thrive in our region. This has been a great year for seed-saving. Our seed-bank now contains over three, five-gallon buckets of vigorous, pure, Heirloom seeds especially adapted to local growing conditions.

So, what's next? We have a 10-point Mission Statement aimed towards local food self-reliance To read it, click here. Much of it is already in motion. In coming seasons we would like to:

Build a greenhouse – to extend our growing season and have the capacity to provide “starts” to other Sharing-type gardens in the region.
Create small local canneries – where people can learn and practice the art of food preservation.
Expand the seed-saving program to create a network of local gardeners and farmers.
Mentor other groups to start Sharing Gardens in Junction City, Harrisburg and the surrounding areas or beyond.

Ultimately we'd like to start a “rural-arts” school – a place where people could come to share their knowledge and experience of living close to the land through offering hands-on workshops, and where people could learn and transplant this knowledge back into the community.

The Sharing Gardens is a non-profit charitable program and we can issue tax-receipts for any donations. We can always put funds and materials to good use and we'd also love to find a land-base for the school and gardens. Please be in touch if you'd like to partner with us in this meaningful, pioneering adventure. 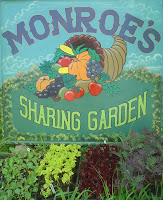 We'd like to close this presentation with a short story:

Once upon a time, there was a group of people who found themselves in Hell. Now at first it didn't seem like Hell. They sat together around a large table that was covered with a sumptuous feast. Every favorite kind of food they could think of was there. Gorgeous salads and cheeses, soups, nuts, casseroles and pies. All the bounty of the Earth. The smells were intoxicating; the colors – a true work of art. What made this Hell was that the only utensils to eat the food were each three-feet long. No matter how long they stretched their arms and craned back their necks, they could get none of the food into their mouths and feed. They remained starving in the midst of a feast. 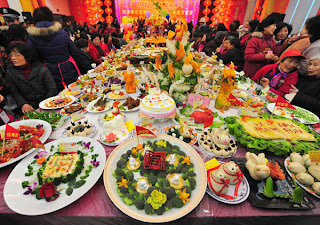 There was another group who found themselves in Heaven. Everything was the same: the beautifully laid banquet, the exquisite choices, the sights and aromas. Here too, the only utensils for eating were all three-feet long. The only difference was, that instead of trying to feed only themselves, the Heaven-crowd picked up the spoons and forks and began feeding each other. And in this way, they all were able to share in the feast. Thank you."

Email ThisBlogThis!Share to TwitterShare to FacebookShare to Pinterest
Labels: Gratitude, History of the Gardens, How to Share, Media, Musings